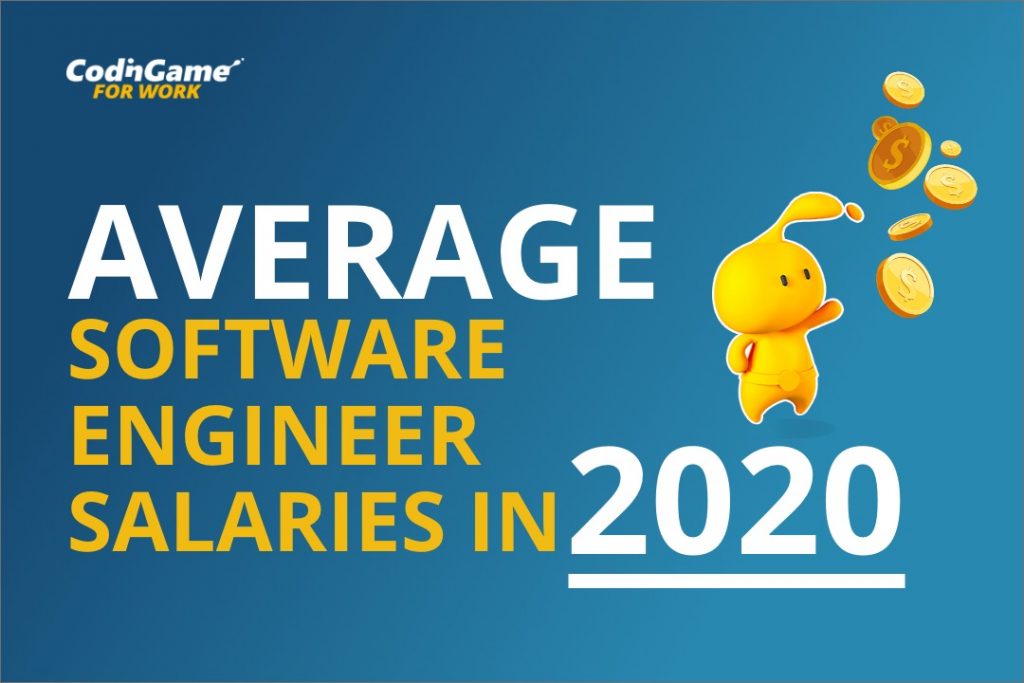 It’s absolutely no secret that talented developers are in high demand.

This is true across the world, but how do software engineer salaries reflect today’s tech talent market?

As part of our 2020 CodinGame Developer Survey, we asked over 20,000 developers, in over 125 countries, to share their yearly salary with us. After analyzing the results, we were able to create a ranking of the 10 top-paying countries (see infographic below).

The best-paid developers are in the USA

The United States of America is the world’s top paying country, with an average yearly software engineer gross salary of $95,744.

What’s more, as tech startups continue to sprout up across the states, and The Big Five (or FAAMG – Facebook, Amazon, Apple, Microsoft and Google) continue to grow and invest, the US is set to keep their place as number one for the foreseeable future.

“The Big Five tech giants have a combined market capitalization of over $4 trillion. These powerful tech behemoths often devour the talent, technology, or entire businesses of aspiring competitors. Given their financial weight, mergers and acquisitions have become a key tactic in maintaining their strong grip on tech supremacy.” – Katie Jones on The Big Five

In particular, Seattle stands out as the American city where developers are paid the most, with a real adjusted average salary of $105,735. The city has been up and coming for years and is now a buzzing and highly coveted work capital for tech talent.

One major advantage of Seattle’s tech ecosystem is that, although there’s plenty of room for innovation and entrepreneurship, it doesn’t rely purely on startups. Indeed, some of the major Seattle employers include Microsoft, Salesforce and Adobe.

In recent years, the city has even been named “the new Silicon Valley”. Eat dust, San Francisco!

We’re very aware that an average for a country can’t possibly reflect the whole picture. Especially in countries as huge as the US!

“Country of work” isn’t the only thing to affect a developer’s salary. The company you work for, the position you occupy, whether you’re an entry level developer or a senior software engineer, the industry you work in, etc. can strongly influence your paycheck.

In our 2020 survey we found, for example, that the best paid developers work in the Insurance industry, closely followed by the Media and Healthcare industries.

According to our CodinGame ranking, The United States, Germany, the United Kingdom and Canada all offer average software engineer salaries of over $55,000 per year. Pretty good going!

However, quality of life isn’t directly linked to money in the bank and, depending on where you live, your buying power isn’t necessarily connected to your bank balance either.

Yes, a high salary is all well and good. However, it’s not the be-all and end-all and – at the risk of sounding particularly cheesy 🧀 – money can’t buy happiness.

In the USA for example, buying power is strongly impacted by the cost of health care, largely owned and operated by private sector organizations. Indeed, developers living in America need to take into account the risk of health care expenses, should they fall ill. A software engineer salary in the US will most likely leave room for savings, albeit this will lower buying power compared to that of a developer living in countries with universal health care, such as the UK (with the NHS) and France (with the Sécurité Sociale).

Speaking of France, although the Parisian lifestyle appeals to many (in a dreamy, “croissant et café” kind of way), an increasing number of French developers strive to leave the city – and are willing to sacrifice their sky-high software engineer salary to do so.

The busyness, the noise, the pollution and the living costs (rental costs are 188% more expensive in Paris than they are in Provence, at just over 35€ the square meter) are just too much for some software engineers, who up and leave for a more laid-back environment.

Antoine, for example, full-stack developer in Montpellier, decided to relocate to the South of France, despite a lower salary offer:

“My girlfriend was offered a job transfer to Montpellier and I was more enthusiastic than her to move away from Paris! I started looking for work myself.

I’m not from Paris and never planned to spend my whole life there. The main reason for our relocation was that we would like to buy a house in the near future and in the Paris area the cost is just so high.

I accepted a salary decrease (close to 20%). The salary difference has already been compensated by the difference in flat rent. And, I really enjoy being able to go to work by bicycle under the sun of the South of France – beats the noisy subway any day!”

The salaries of tomorrow

Of course, the tech talent market and the salaries rolling around inside it are bound to evolve over the next year.

Some markets will be affected more drastically than others. It’s unsure, for example, what’s in store for UK developers after Brexit. According to LinkedIn, more than half of tech recruiters in the UK (54%) state that they’ve had to increase their salary offers following Brexit. Another 43% say that their companies have had no choice but to give raises to existing tech team members so as to hold on to them.

On another note, remote work and freelancing are gaining popularity amongst developers who crave flexibility – changing the way programmers are hired and paid.

This trend is expected to result in an increase in developers’ earnings. Either because developers are securing high salaries by working for companies based in big-buck cities (Paris, Seattle, San Francisco, Berlin, etc.) whilst living in areas where everyday costs are much more reasonable, or because developers are working independently and negotiating high pay for isolated projects.

Indeed, as the demand for tech talent continues to rise, an increasing number of developers are leaning towards these flexible working situations. The fear of having to secure new clients or not being able to find a permanent contract if/when they fancy is pretty much nonexistent today. Programmers know they’ll find work!

All this talk of cash and code can be a little overwhelming. It’s important to keep in mind that salary isn’t the only thing developers are interested in. In fact, when we asked developers what mattered most to them when considering a job offer, “Salary” was in third place, behind “Technical challenges” and “Flexible working hours”.

Go with the flow. Make sure you offer relevant software engineer salaries. However, don’t stop there. There’s so much more you can do to make your company a fantechtastic place to code.

Nathalie is CodinGame for Work’s content manager. When her head’s not humming with #ContentStrategy, #BlogPosts and #SocialMedia, chances are she’s watching Friends (again) or making strawberry and lemon cheesecake. Golden retrievers are her ultimate weakness.
Close Menu