This article is the second one of a series of interviews that highlight people from our community who successfully retrained to become developers. Check out the other articles:

In our “Retraining as a coder” series, this week, we’d like to present an interview with Dominic Myers, aka Dom. After several fulfilling years working as a nurse, Dom felt like getting trained in programming after having discovered the basics of code by himself.

Now a full-time front-end developer, he explains what made him decide to change his career path, the resources that allowed him to learn coding, and the difficulties as well as the satisfactions he encountered along the way. 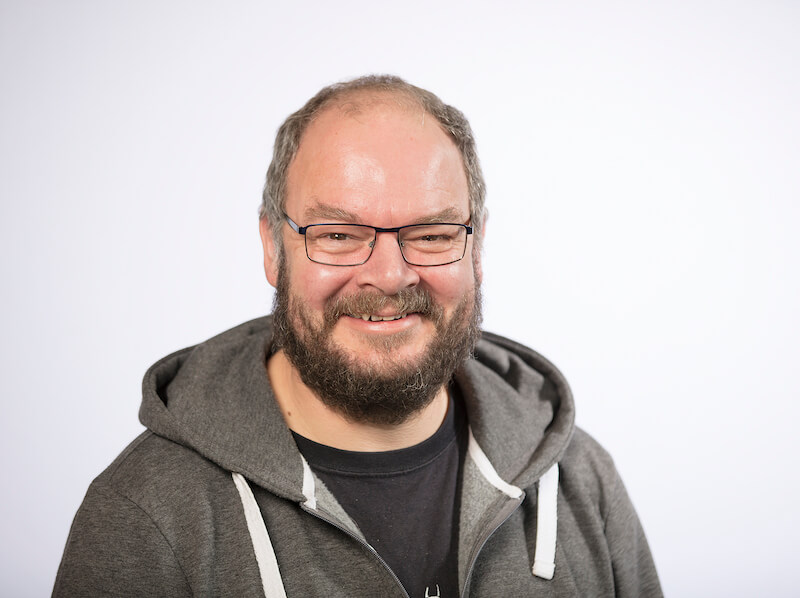 Hi Dom, can you introduce yourself and tell us what led you to change careers and retrain as a developer, and what were you doing before?

Hi, my name is Dominic, but you’ll likely see me online as an annoying mouse. My primary reason for changing careers was age and finally understanding that my Dad was wrong to say, “Whatever you do for a living, you’ll end up hating”.

I left school wanting to go to art college, then decided I’d try and ease my social conscience by being a Social Worker; I was too young to be a social worker, so I worked as a carer for a year before training as a psychiatric nurse in Sheffield.

Then, as my kids got older, I clocked I had a chance to take a pay cut and try doing something different for a living. At that point, coding was only a hobby.

My career is probably better described by using the other semantic meaning of the word – it’s undoubtedly careened significantly:

From the arts to nursing and then to front-end development. Wonder where it’ll be going next?

What do you do now?

I’m a front-end developer and have been for the past few years. My original job title was cloud developer, but that was in the infancy of local government adoption of the cloud. I’ve played with AWS, and I guess I know a fair bit about that and other cloud providers.

Still, the announcements coming from Amazon of new features come thick and fast, so my knowledge is probably vastly out of date these days. I’ve concentrated purely on front-end development over the past seven years or so.

I love nothing better than using the so-called web fundamentals of HTML, CSS and JavaScript to help our users engage with our products.

How long did it take you to retrain?

I guess that my retraining is different from most people as I didn’t see it as retraining, but merely something to do for fun.

I got into coding through playing with Photoshop actions in the dim and distant past. Then I thought I’d try to teach myself proper programming, which I did in my spare time.

Until that is, I saw a part-time conversion MSc advertised at ARU – a local university – I applied and was accepted and loved every minute (apart from the Java stuff, that was horrible). I finished that and was still nursing quite happily until I saw an advert for a local cloud-based startup in Cambridge.

I went to the interview, after working a night shift, and loved chatting with the interviewer – to the point where I ended up interrupting poor Lars – and he offered me the job that afternoon.

Did you retrain while you were still working in your previous career?

I did indeed retrain while working as a nurse; it was my hobby while I was working, you see. I did work nights though so that I could look after my kids during the day, so on quiet evenings I could plow through my course work rather than read.

Did you teach yourself to code or did you attend a training course/school? How did you find this experience?

I started off trying to teach myself until I realized I was getting lost in all the possible avenues of learning available at the time. That, and seeing the advert for the course at ARU, prompted me to enter formal education.

I’ve read about and researched bootcamps and other systems but, at the time, I don’t think there were any available locally.

I’ve worked with people who have attended bootcamps, and their level of knowledge is excellent, so I don’t think there’s a significant difference on those who have formal computer science education and those who attend a bootcamp.

There’s even a suggestion that those alternatives increase diversity amongst developers – by allowing those who are traditionally unlikely to attend university to work in the field – and that can’t be a bad a thing.

If you taught yourself, what resources did you use?

I started teaching myself in the dim and distant history of the internet (something like 15 to 20 years back) so there were resources, but not as many as today.

The resources were of similar quality to today: there were some brilliant resources and some that left a lot to be desired. We were in the heyday of jQuery, and my final dissertation was on AJAX as that was a new, up and coming technique. I used and still use MDN nearly every day – the proper specifications are brilliant!

What were the main challenges you faced changing careers?

I guess the primary challenge was in terms of money. Don’t get me wrong; nurses aren’t well paid, by any stretch of the imagination. But I had been doing it for the best part of two decades, so I was experienced and well thought of.

I had made my way up the hierarchy, and my next step was to become a permanent night coordinator, I had just finished a year acting up to the role, so was merely waiting for a vacancy.

Thinking about doing the same old, same old, year after year was leaving me feeling cold though. Having weekends off and not having to work shifts was a revelation though – that I liked, though it took some time to get used to, and I still sleep badly.

What advice would you give to anyone who is thinking of changing careers and becoming a developer?

In terms of advice to prospective developers, then I think the primary bit of advice is to be continually curious.

That curiosity needs to be tempered, though, especially in terms of learning JavaScript. The sheer plethora of resources can be overwhelming and, quite apart from the quality of the help, you need to be conscious of the focus of the educator.

I’ve recently come across the concept that the teaching of JavaScript libraries and frameworks might be seen as an industry, and that makes me uncomfortable.

I’m writing here in 2020, and some courses will claim to be able to teach you all there is to know about React, Angular or Vue, but the best ones will focus on the one thing those frameworks would be useless without: JavaScript.

Would you say that retrained developers have more difficulties finding a job today than those who have an academic background in Computer Science?

It certainly seemed to be that employers had a bias to those with a formal computer science education but opinion that appears to be on the wane – I’ve certainly seen that during my career over the past decade.

My first role had a requirement that applicants have a degree, but what that degree was in was irrelevant. On the whole, I’d say that there shouldn’t be a major difference between academically trained developers and retrained developers in terms of difficulties in employment.

If nothing else, my previous career provided me with some skills that other developers don’t have straight from university. And it certainly means that there’s an initial ice-breaker during the interview process.

How did you hear about CodinGame?

I heard about CodinGame because even now, after working in the field professionally for several years, I still enjoy programming challenges. While by no stretch a gamer per se I am keen to hone my programming chops and CodinGame provides a place to play.

Did the platform help you improve your programming skills?

It has, and it isn’t the only platform that I play on either. I now challenge myself to use the shortest ES6 syntax possible to beat the challenges on both CodinGame and other platforms.

Is there anything else you would like to add? 🙂

I’m a fan of learning through teaching. While this does increase the number of learning resources available.

There’s no better way of understanding something than trying to explain it to someone else – or even something else: my dog knows a shed load about semantic HTML!

So, by all means, take a crack at the challenges on CodinGame. But also take a look at the other submissions, and learn from them! If you can, try and analyze which approach is likely to be better for different situations. Maybe even document your conclusions and thoughts.

Thanks a lot Dom for this very insightful testimonial!

Are you interested in retraining to become a developer? Check out our complete guide!

Are you a company bold enough to hire retrained developers? You’re welcome! Check out our tech hiring platform CodinGame for Work to source, screen, and hire talented developers from our community, who have diverse and amazing backgrounds.