Two years ago, I launched the first session of CodingHubs during the CodeBusters contest. Since then, during every CodinGame contest, players have been meeting and discussing strategies during CodingHubs.

Is this whole CodingHubs thing still a bit blurry for you? Worry no more, I’ve got answers to all your questions.

A CodingHub is an event where developers meet, code and converse.
Just like a regular day at work! 😝

It is organized by one or two hosts. Most of the time, they are regular players in the community. A CodingHub can take place either in a company meeting room, a university classroom, a coworking space or even a living room. Depending on the place, a CodingHub attracts anywhere from 5 to 30 developers. Usually, they are held during work week evenings.

To get a more concrete idea of what it is, check out the photos below from previous hubs.

Hub in Econocom during Fantastic Bits

Hub in Acagamics during Ghost in the Cell 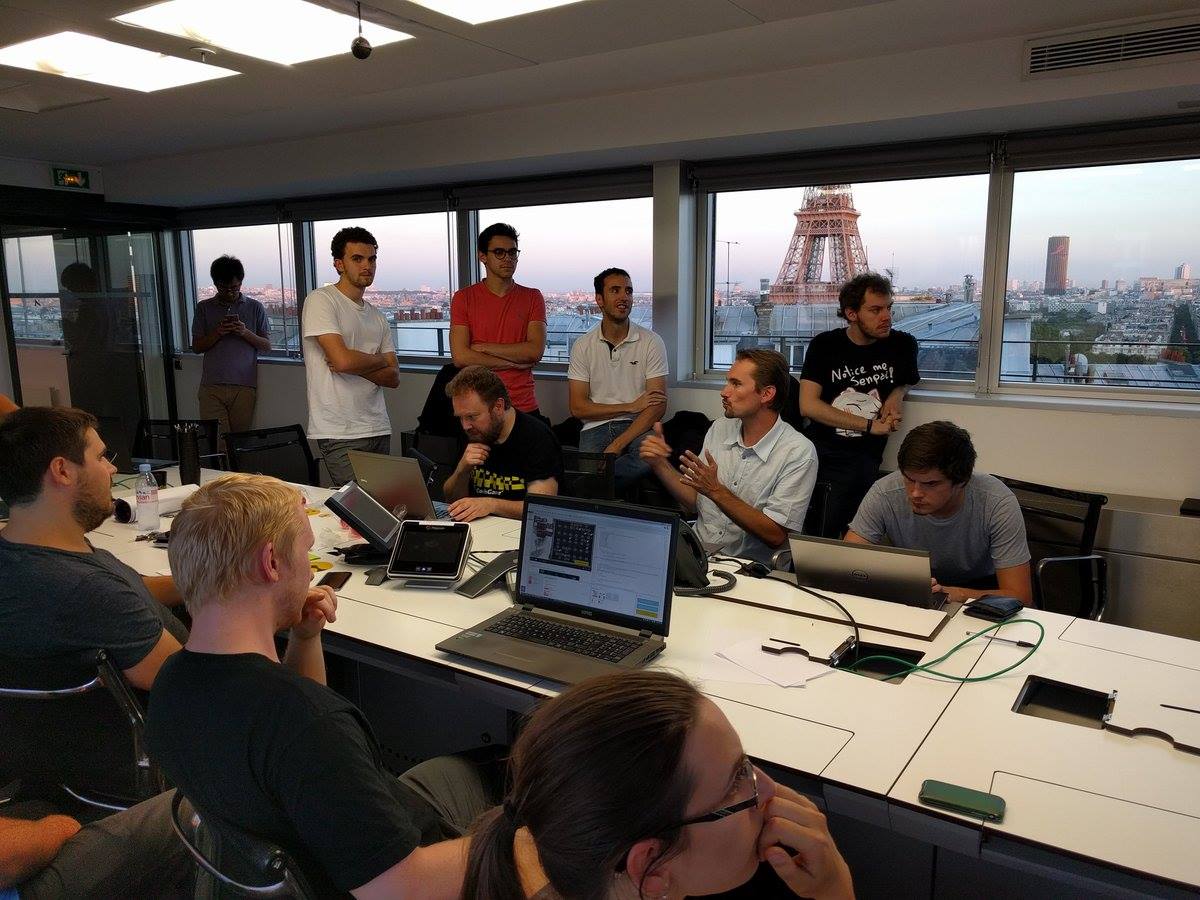 Hub in Murex during Hypersonic

Hub in Meritis during Mean Max 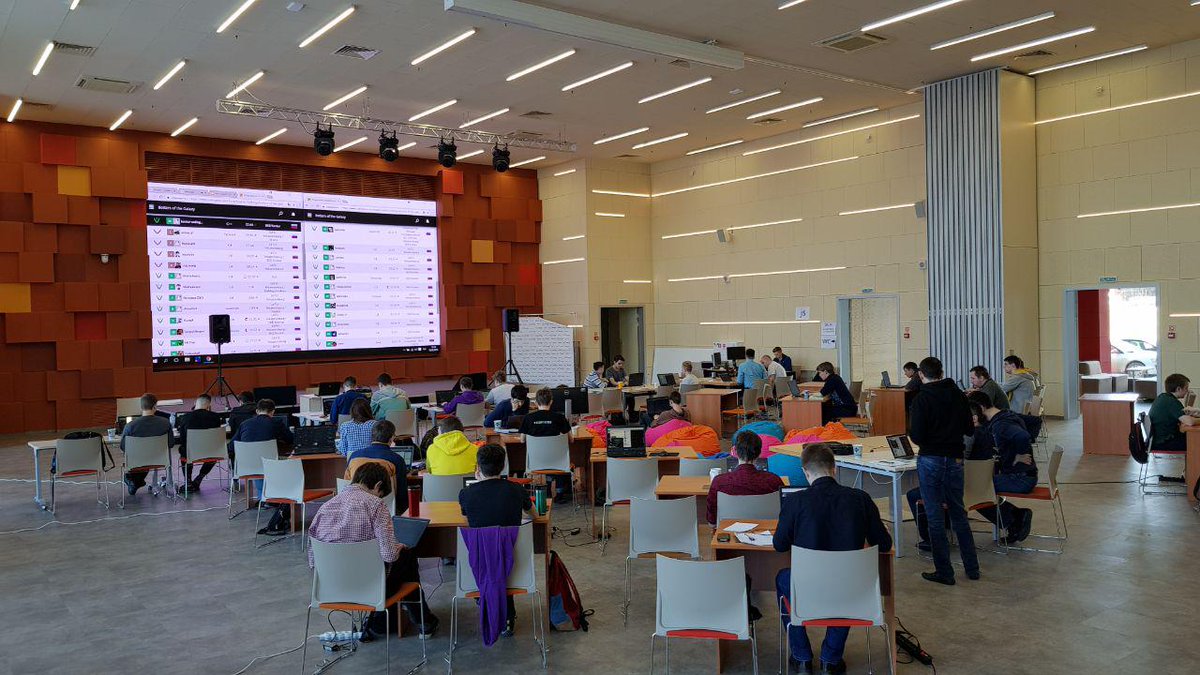 Hub in Kontur during Botters of the Galaxy

Where Does “Hub” Come From?

We didn’t invent the term “hub.” For a few years now, Google has been organizing hubs of developers during the Google HashCode competition every February.

Why Should You Join a CodingHub?

First, it is a good opportunity to meet other developers in real life. Sometimes, it will be the very people you chat with online, so you’ll be able to put a face behind an avatar.

Second, joining a CodingHub can help you in the competition. It’s the best place (other than the chat) to learn tips about the game.

Third, CodinGame sends a pack of goodies to large (>10+ participants) CodingHubs. Usually we print postcards and posters with the artwork of the challenge. We also have stickers, pens and eco-cups.

At the end of the day, it’s just nice to meet with developers who share the same passion. Maybe you won’t code that much, but you’ll surely spend an enjoyable evening.

What if You Don’t Feel at Ease Joining a Hub?

I can picture the shyest of you hesitating between an unfamiliar place full of strangers (with whom you might speak!) and a comfortable seat in front of your screen at home. Easy choice!

Come on; take a leap of faith! I understand the feeling. Believe it or not: Despite being a community manager, I’m quite shy. I participated in two hubs in CodinGame and another one at Kaliop in Montpellier, and I enjoyed them a lot. Just remember that most participants have the same expectations as you have: to enjoy the challenge with other players.

How Can You Join a Hub?

All CodingHubs are listed in this Trello board and on the map below. (Some hubs can be private; they are events reserved to people internal to a company or a university.)

Once you’ve chosen a hub convenient for you, you have to contact the host to confirm that you are coming. Most of the time, they’ll ask your real name for security reasons (for example, if the hub happens in a company/university).

What Should You Bring?

CodingHubs are free! Just don’t forget your laptop if you want to code a bit.

Most of the hosts arrange for catering (pizza, soda…), but free feel to make arrangements with other members of the hub and the host if that’s not the case.

What if There Is No CodingHub in Your Vicinity?

You could choose to take a chance and host your own event.

Otherwise, you can fill out this form to alert other players that you’re interested in joining a hub. I’ll then add your name to the map with a green laptop icon.

If you see some CodinGamers interested in joining a hub near you, don’t hesitate to contact them on the chat or on the forum. If you have difficulty, I can help, so ping me!

If you live in a remote place…well, you could still try to join a virtual CodingHub! Some players have discussed the idea of having a Discord server. And, of course, there is still the general chat (and private chat rooms) to discuss strategies and share replays with other players.

How Can You Host Your Own CodingHub?

It’s quite simple. First, you have to fill out this form. Make sure you have the authorization of your company or university to plan an event on their premises and to invite external people from outside. Then, you just have to find a room and a date. The room must be equipped with sufficient power plugs and network connections (and chairs). Some hosts like to project replays on a TV or screen.

You don’t have to animate the evening as the host, but if you feel like giving pointers to the participants, don’t hesitate! Make sure the invitees feel comfortable, and they will enjoy a pleasant evening.

If you plan to host your first CodingHub, I suggest you team up with friends who will play the challenge too. I also recommend communicating about the hub using either a Facebook event or a MeetUp event. Invite friends and colleagues. If everything goes well, word of mouth will bring you more participants the next time.

Where Can You Keep up to Date with the Next Hubs?

We have a Facebook group where I share information about the upcoming hubs. I also keep the Trello board up to date between challenges. In any case, you can always contact me if you have any additional questions!

Here are testimonies from participants and hosts of previous CodingHubs.

I think it’s very nice. Besides CodinGame, it’s an event where you can meet developers who live near you. It’s always interesting to have contacts in your work’s domain.

It’s quite nice to have CodinGame happen in real life.

I like programming, solving puzzles and meeting new people. I held my first CodingHub during Mean Max. There were only a few people, but it was very enjoyable.

dominisz (host; join his next hub in Lublin!)

As a student, it’s a nice opportunity to get noticed by companies. I enjoyed discussing strategies and sharing fun replays.

I host hubs because I like organizing events. I can either “tutor” beginners or converse with talented developers of the platform. I actually don’t code during a hub, I prefer to talk with participants.

Escdemon (host; join his next hub in Lyon!)

Now, you should know everything about CodingHubs!

If you’ll be close to Montpellier on April 23, join CodinGame’s hub! Reserve your spot by sending me an email at [email protected]