I’m very happy I won the Smash the Code contest. I recently reached the 3rd position of the Coders Strike Back contest, and already shared how I implemented a genetic algorithm here on the blog. Here below is the strategy that made me win Smash the Code. 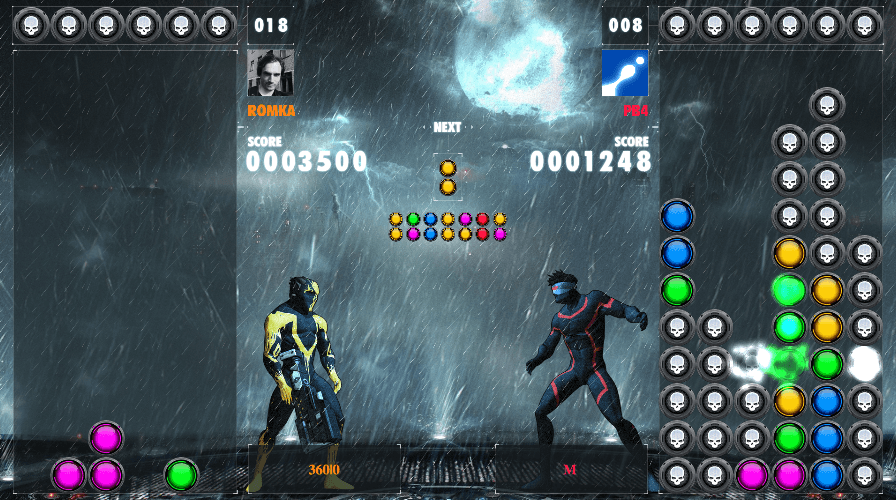 Finding the best combos was key

This game has a medium branching factor of 22 placement possibilities each turn. Future game pieces are known for the next 8 turns. An exhaustive search for the placement of those 8 pieces would require 22^8 simulations of the game board: this number is too impractical during a 100ms time frame. At most, an exhaustive search can be expected to go as deep as depth 4, missing on potentially great combos.

I analyzed a few games at the beginning of the challenge, and made a few observations:

Those two observations suggest that it is very important to look far ahead in the future. And that given the huge number of ways to prepare a good combo, it is acceptable not to explore all possibilities exhaustively. The two ways I considered were:

Unable to find a reliable and computationally cheap heuristic to perform a beam search, I settled on the stochastic approach.

The point on which they differ is how “try something else” is defined. Pure Monte Carlo is completely random, whereas the other algorithms implement ways to learn from previous mistakes in order to converge faster towards an optimum.

Already familiar with genetic algorithms, I decided to settle on this approach to find the best combo. There is a lot of good reading material available on that topic, some of it even on CodinGame’s forum! (see for example Magus’ article on Coders Strike Back).

In Smash the Code, defining a genome is straightforward: it is a set of 8 integers between 0 and 21, representing the placement of the next 8 game pieces.

Heuristics to Identify a Good Combo

Much less straightforward is the definition of a good combo. Should you prefer dropping 5 skulls on your opponent 3 turns in the future, or 8 skulls 4 turns in the future?  A score calculation is made after simulating a sequence of 8 moves.

Here is the basic breakdown of the ordering rules used in my algorithm.

At this point, here are a few remarks I’d like to make:

Preparing combos on your side of the board is a good strategy. However, if the opponent sends skulls on your board before you can trigger your combo, all the hard work was done for nothing.

A basic way to handle this was already described above: if you only target smaller combos, there are limited chances that your opponent can block you. But then, why wouldn’t you wait for two more turns to end the game quickly with a huge combo?

To take the opponent into account, I used a more complex approach based on the concept of a scenario. A scenario is defined as the prediction of the number of skulls that will drop on your board for each of the next 8 turns.

The idea is to sequentially evaluate what scenario should be expected from each player, and act accordingly. In the end, I settled for a 3-step approach described in the table below :

Opponent Prediction can Make You Worse

Direct application of this method can easily lead to bad play. The reason behind this is that an AI becomes afraid of what the opponent does, and acts accordingly by planning for smaller combos.

Variations on this Method

At some point during the contest, I repeated step 2 several times with an aggressive, a balanced and a long-term opponent behavior to come up with 3 different likely scenarios. Then step 3 was modified to find the best solution on average in those 3 scenarios. I believe this approach makes the most sense, but its computational cost was too high and I had to scale things down.

At another point in the contest, I only used step 2 and 3. This resulted in a better behavior against top 50 AIs, but worse against top 5 AIs. I was aiming for top 5 and tuned my AI accordingly.

It took a lot of work to tune all the behaviors to a point where trying to predict the opponent’s move actually resulted in better play.

Gains from Predicting the Opponent’s Behavior

I believe the interactions with the opponent were too limited and should be more prevalent in future contests.

On Game Theory and Simultaneous Games

Simultaneous games such as Smash the Code are very complex to approach from a game theory point of view. Here is a reference article on Wikipedia on the prisoner’s dilemma. It is an example of a very simple game: only 2 options are available to you and your opponent, limited to 1-ply depth, perfect knowledge of the rewards gained in all outcomes. As seen by the length of the article, the analysis of such a game is already very complex!

Unless every player on CodinGame can find a Nash equilibrium for simultaneous games (which will never happen), the winning strategy will always be to assume that your opponent plays sub-optimally.

The objective switches from “being as good as possible at the game” to “being good against the players I am faced with”. This is the core reason why we see cycles appear where player A beats player B, player B beats player C and player C beats player A.

A comment on the ranking system at this point: the player ranked #1 on the leaderboard plays more than 50% of his matches against the player ranked #2.  This fact and the presence of cycles with player A>B>C>A can make the rankings unrepresentative of the actual strength of an AI. I suggest that ranking matches are picked somewhat more randomly than what is currently done.

A Few Figures on Code Performance

During the 100ms allocated to one turn, I was able to make up to one million simulations of one move (or 125k playouts of 8 moves). That number decreased as the board filled up, but never went below 400k simulations.

Credits to Jeff06 who shared with me (among many other things) his lightning-fast BFS code from The Great Escape: it was a great starting point to build upon!