CodinGame held the “Code a la Mode” coding competition in March 2019. The game is now available to play.

A bit of time has gone by since Fantastic Bits, but the lazy way is still working well – or, at least, well enough for me. I have indeed reached Gold in all multiplayer contests for the past two years and Legend twice, including a rather satisfying #44 rank at Code4Life.

However, ugliness has become an unfortunate trademark of my contest code. It systematically turns into an unmaintainable spaghetti mess in the last few days of the competition, as I randomly try out hastily written last-minute hacks in a hopeless attempt to make my way back up the leaderboard.

For Code a la Mode, though, I decided to try my best to avoid that. I ended up with what is definitely my best contest entry ever on CodinGame, both from a design and implementation perspective.

Let’s see how it went.

My usual method for passing Wood leagues is to code first and ask questions later. I quickly implement each new rule in the most direct way I can think of. For Wood 3, this means:

Wood 1: They See Me Cooking

I handled the croissants exactly the same way as items in Step #4: I simply target either the dough or the oven, depending on my current item and the oven contents.

In the (relatively rare) case where all three orders require both, I will just wait until one of the orders is completed by my partner and replaced with a new one. Yes, it’s grossly suboptimal, but remember that the philosophy here is to have something that will work in most cases, not every case: It’s OK to accept that there are complex situations you simply can’t or won’t handle – at least for now.

At this point, I also started to scan the kitchen for chopped strawberries or croissants that my partner might have laid down, and included those in Step #4. Still quite simple: new X/Y pairs for each type of item, keeping the one closest to me when reading the tables information.

Lazy tip here: In the vast majority of cases, there won’t be chopped strawberries all over the place, so you can allow yourself some degree of inaccuracy for the implementation of “closest.” Initially, I even just chose the first item I could find, and this was more than enough to get me to Bronze league! If you’re reading this before trying the game, hopefully, it will be the same for you. 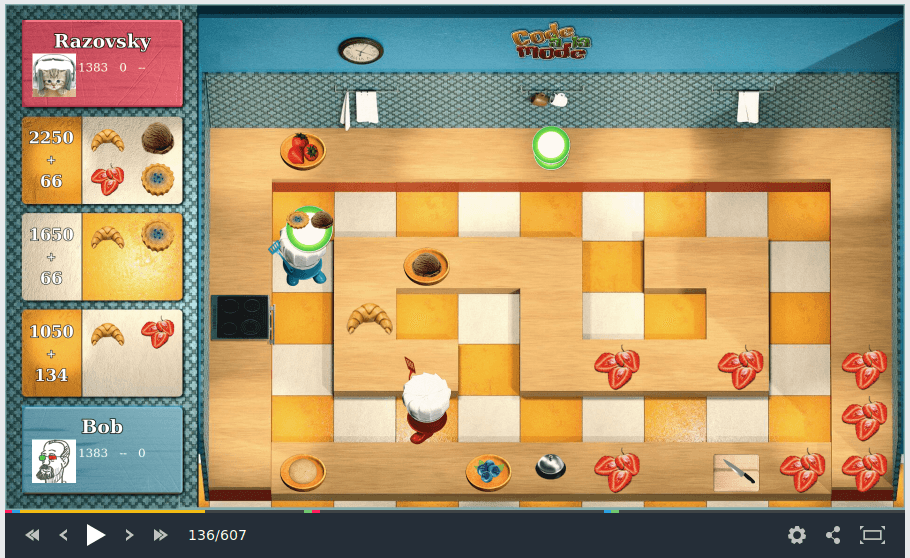 (Special thanks to Razovsky for quickly coding a mad strawberry chopper for this screenshot and replay: This is a funny behavior that many of us accidentally coded during the contest, but I had lost all the replay links.)

Only in Bronze did I decided to use the closest item, according to the Manhattan distance (that was quicker to write). Only in the Gold league did I finally replace it with true flood-fill-based distance.

Bronze League brings us the dreaded blueberry tarts. In fact, they are not such a big deal to handle, since they can be processed just like the other two “complex” items. There are more steps, but it’s still a simple chain that you can run in a single go if you start with empty hands: dough → chopping board → blueberries → oven. So, for a first draft I just added that logic at Step #4 and adjusted the order selection once more to only select orders that contain at most one complex item.

Of course, this can only get you so far. At some point, you do need to start handling partial dishes, storing food on tables and picking it up later. I added yet another pair of X/Y variables for the location of the closest available table and tracking of whatever I would store on it, so I could check that it had not been taken by my partner.

That seemed simple enough to me at the time, but soon required adding extra stuff in Step #4 in order to drop, pick up or skip the contents of the storage table, also ensuring that I had a dish before picking up a second item – which I might already have left on the storage table…you can see where this is going.

Long story short, I eventually managed to get it to work, and it was enough to rank #60 after the promotion to Silver, but there were a lot of situations where the behavior of my AI was clearly inefficient, and by then my code had turned into an ugly mess of spaghetti and duplicated code. 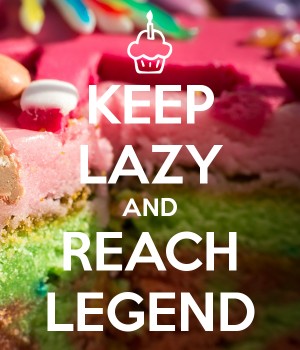 Make Me One with Everything

What helped me clean up my code and algorithm was the realization of something fundamental that had quite escaped me until then: Virtually everything in the game can be represented and handled the same way.

There is no difference between the initial infinite stash of strawberries and strawberries dropped on a table. A semi-complete order on a dish or the chopping board are not special things, they’re just resources that I’m going to use at some point in the game, so there is no reason to represent or handle them differently.

Everything can be thought of as a set of elements: all appliances, raw ingredients, complex ingredients in intermediate and finished states, customer orders, partially-completed dishes, stuff that you’re holding, stuff that’s in the oven, stuff that’s on tables…

Raw ingredients and appliances are sets with a single element; customer orders and partial dishes are sets with several elements. A free table is an empty set, and so on…

The only special case here is the oven: If it contains a baked croissant or tart, then I don’t represent it as the oven, but as whatever it contains, just as if it were a table. This way it’s much easier to include the contents in my pickup code, but it effectively removes the oven from my map. However, if I have to bake something, I still need to be able to go to the oven, so I did keep one X/Y pair with the location of the oven for that case.

At this point, let me make a couple of important side notes about implementation: 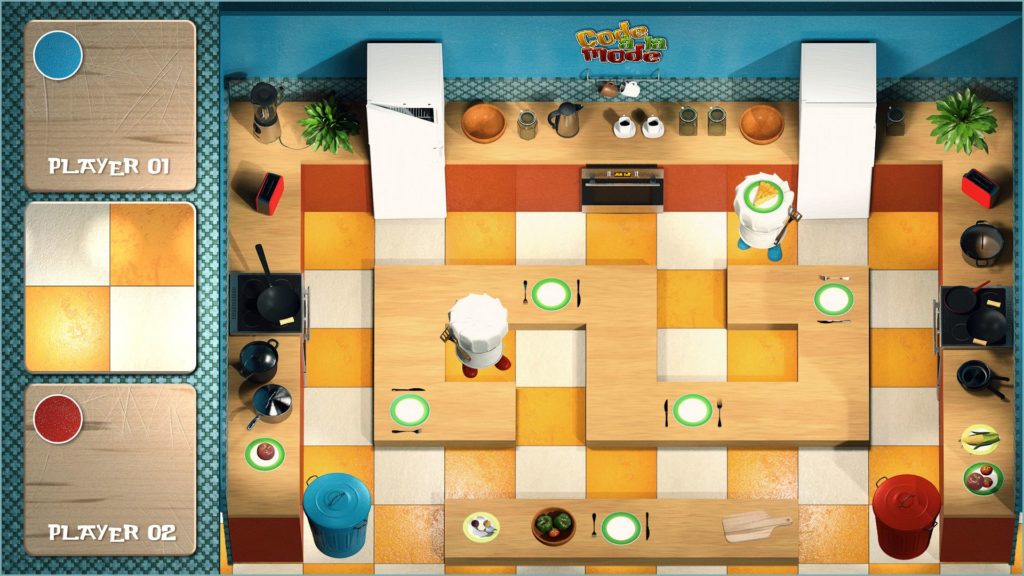 The kitchen as originally designed by the concept artist

With that in mind, the high-level game logic for one turn becomes as simple as:

Because the ideas here are simple and I chose a straightforward implementation (for me), this turned out to be very quick and easy to write from scratch – about two hours to set up the core infrastructure and one more to add the extra features – with very few bugs along the way. Adding tarts literally took me no more than three minutes and a dozen lines of code… The results were amazing: I reached #20 by the time the Gold league opened!

In Gold, I only added a few extra features, still very simple and obvious:

The order tracking and oven save went a long way towards preserving a very high Gold ranking. Although I wasn’t high enough to be part of the first Legend promotion, I was still very close to the boss and got promoted just a few hours after the opening. 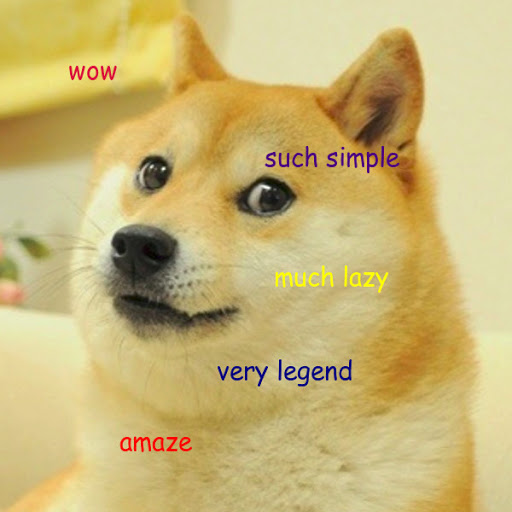 After that, I did try some extra features, such as using the baking time to start assembling an order, or setting my items close to my next target rather than close to my current location. Although I felt those behaviors made sense, somehow they never yielded the results I was hoping for, once added to the arena.

Admittedly, by that time the competition had improved and most people in Legend league were more or less tied. It was sometimes hard to really see whether a change was an improvement – in fact, I often needed to spam-push the same code many times in order to get a good start and rise quickly out of the depths of the league.

In the end, I just shelved those changes for deeper exploration when the game is released as a multiplayer game. After minor adjustments to the existing features, I finally stabilized at #64 at the end of the contest.

While #64 is definitely not a top-tier rank, I’m still very satisfied with it, considering how simple my code is – a single idea for the data representation, which makes everything else simple to imagine and easy to implement. For once, I was able to keep the code very clean and quite compact as well – less than 500 lines of code, no spaghetti, no ugly warts or quick fixes.

As one of my teachers said to me 20 years ago or so, any fool can build something complex, but it takes genius to come up with something simple and beautiful. I don’t see myself as a genius, but now I think I understand what he meant.

I had a lot of fun in this contest, and it certainly got me to refine my simplicity skills a bit further. Thanks a lot to csj and Matteh for this opportunity!