I’m really happy I managed to reach the 3rd rank at the Coders Strikes Back contest. It was a really great competition with a nice game. Here below is a summary of my strategy. 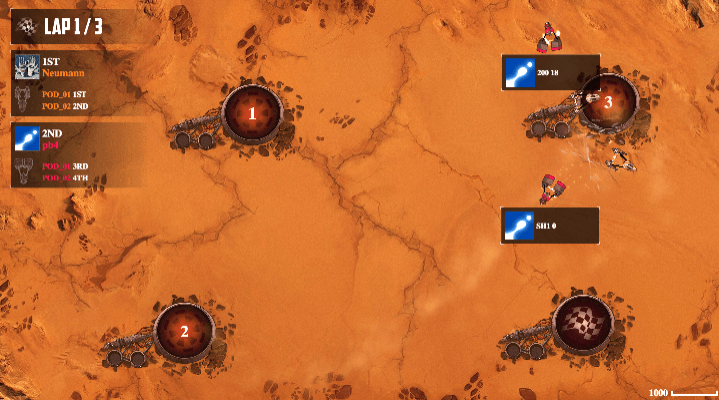 The core of the AI is based on a genetic algorithm. There are a lot of resources on the Internet to understand this class of algorithm, but here are the basic requirements to implement one:

Example of Genome Encoding for an Evolutionary Entity

Subtleties of the Evaluation Function

The distance until the next checkpoint is calculated between the pod and an arbitrary point inside the checkpoint.

Definition of a checkpoint’s entry point

The definition of the entry point was used to counteract the pod’s tendency to settle in sub-optimal trajectories as shown in the figure below:

Two types of trajectories found by the pod (suboptimal/optimal)

Unfortunately, evaluating the factors above after six turns of simulation requires having a good prediction of the opponent’s movements. In order to account for uncertainties in what happens in the future, the evaluation is conducted twice:

Twenty-four hours before the end of the contest, this simple AI with only two runners and no collision simulation was ranked 15th on the leaderboard. When approaching such a contest, a strong base is required before additional features are implemented.

Based on the simulation/evolution component described above, a more complex runner/chaser behavior is devised.

The blocker part of the evaluation function gives a bonus to:

All the factors above are weighted according to their order of importance. For example, the “wait for the opponent in front of its next checkpoint” has of low priority compared to pushing it out of its path.

I had a lot of fun during the last three days of the contest uploading a version of the AI with a behavior where the runner wants to block a hundred times more than it wants to advance. In the final release, I brought this value down to 1.5.