This article is part of the “Focus on a Puzzle” series and aims at explaining how to solve the puzzle Skynet Revolution – Episode 2.

There are two reasons I picked this puzzle for writing a tutorial: (1) I’m a fan of the Terminator series, and (2) after many years, I was successfully able to write a Depth-First Search algorithm (DFS) that solved an interesting problem. There are probably better solutions out there, but I’d like to share how I implemented mine.

In each game turn, the program should cut off an edge between two nodes where at least one of these nodes is a destination node so that at the end of the game all destination nodes are unreachable.

The following actions take place at every turn:

I’m going to explain the problem and the goal with the constraint in an image below. Consider the following graph with 4 nodes where 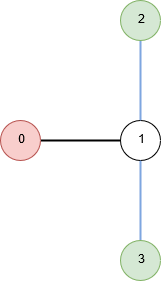 Initial Thoughts on the Solution

For the above graph, the player can cut either of the links in the first turn. The agent then moves to node 1. In the second turn, the player cuts the other link.

Notice that you never want the agent to reach node 1 while node 1 is still connected with nodes 2 and 3. In that case, no matter what you cut, you’ll lose the game during the agent’s turn. 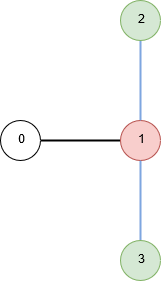 So the agent will always try to reach a node from which more than one gateway is reachable. You can think of this as the winning move for the agent (which makes you lose the game).

Also, the agent will try to force you to make specific moves. For example, in the 7 node graph below where 2, 3 and 6 are gateways, starting from node 0 the agent will move to 1 to force the player to cut 1-3 immediately.

Combining the above two strategies, the agent can reach its desired gateway by the following algorithm each turn:

Thinking as the Agent

The following graph is inspired from test case 5. The number beside each node indicates the distance from that node to the closest gateway. 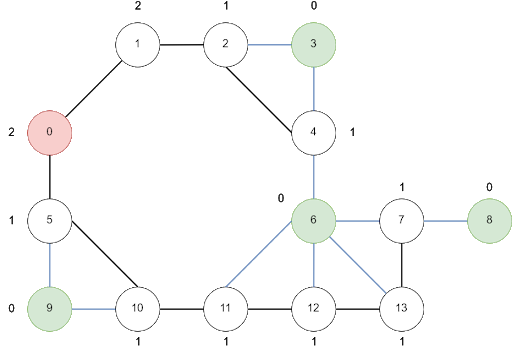 Suppose we cut either 4-3 or 4-6 in the first turn. The agent will move as follows:

Any move will make the agent win in the next turn.

Now that we understand how the agent behaves, how can we counter the attack? As the agent moves to the node closest to a gateway, we need to compute the distance to the closest gateway for every node. It can be achieved with a BFS algorithm. Let’s define the following function:

It takes the graph and the list of gateways as parameters and returns an array containing the distance to the closest gateway for each node.

Next we define a function that will return an array that indicates the number of gateways connected to each node:

After the execution of the function above, connected_gw[i] will indicate the number of gateways connected to node i. It’s easy enough to implement, so I’m skipping the explanation of the implementation.

Thinking as the Player

Notice the example above. The agent chose to visit node 7 instead of node 4 even though node 4 is nearer. This is because the player is handicapped by the agent’s moves if the agent moves to node 5 – after each of the agent’s turns, the player is forced to cut a specific link. Being more intelligent, we can’t let that happen.

Let’s write the following function to determine this shortest turn. It’s a BFS algorithm with a twist.

Take a look at the graph above. We know that the agent will select node 5 in the next turn, not 1. Another way to think about that is to note that the distance to the closest gateway from node 5 is 1, whereas from node 1 it’s 2. So when designing the solution in DFS, we can’t select an arbitrary adjacent vertex to jump to – we need to prioritize where to jump next from the current node. From the current node (where the agent is on the current turn) we need to put all connecting nodes in a priority queue. We need to select the next node from the priority queue of connecting nodes that we’ll have sorted beforehand.

The priority queue should sort the nodes as follows:

Finally, here is the DFS I used. It has the following parameters:

That’s all. Figuring out the DFS along with the utilization of a priority queue was the challenging part for me, and once I figured that out, I was pretty excited. I hope you’ll find this tutorial useful to start developing a solution of your own.