A multiplayer online contest is a special coding event.  For more than a week, a lot of things happen and most of the times you have no idea about it. For Codebusters this will change! Here’s the logbook of the event, as it happens. I’ll update this blog post regularly during the week. Stay tuned!

One hour and a half before the beginning of the contest, it’s still calm here. The calm before the storm? Some of us (like me) are experiencing for the first time this special atmosphere of a Saturday afternoon at the office. Everyone is slowly getting excited.

Now that we’ve fixed last typos (and a null pointer exception 🙃), we are ready to launch the contest and welcome fellow CodinGamers for the CodingHub!

Time to have fun! Beers are cooling in the fridge, some of us are warming up at the table football (hey we cannot lose against CodingHubers), Ray Parker Jr. is about to run in loop in the hi-fi…

Some goodies awaiting the attendees

And you, how are you getting ready for Codebusters?

We’re counting on you to send us photos of you coding, replays of your crazy matches, anything! 😉

Enjoy the beginning of the contest, and don’t hesitate to reach us for any question.

Thank you to those who came for the CodingHub in CodinGame offices! We had a lot of fun, it was a pleasure to meet you and discuss with you.
I remind everyone of the two next incoming coding events: 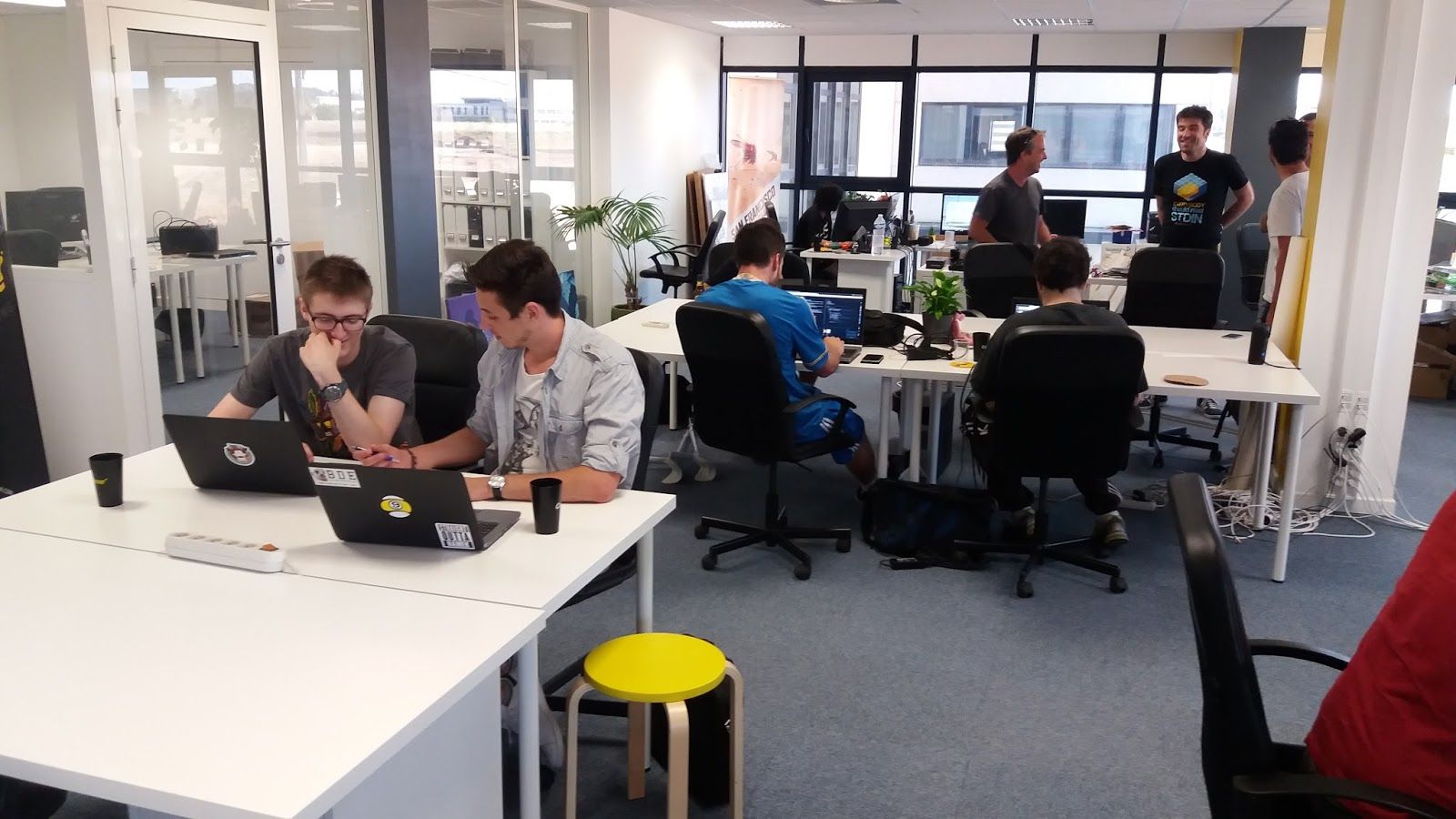 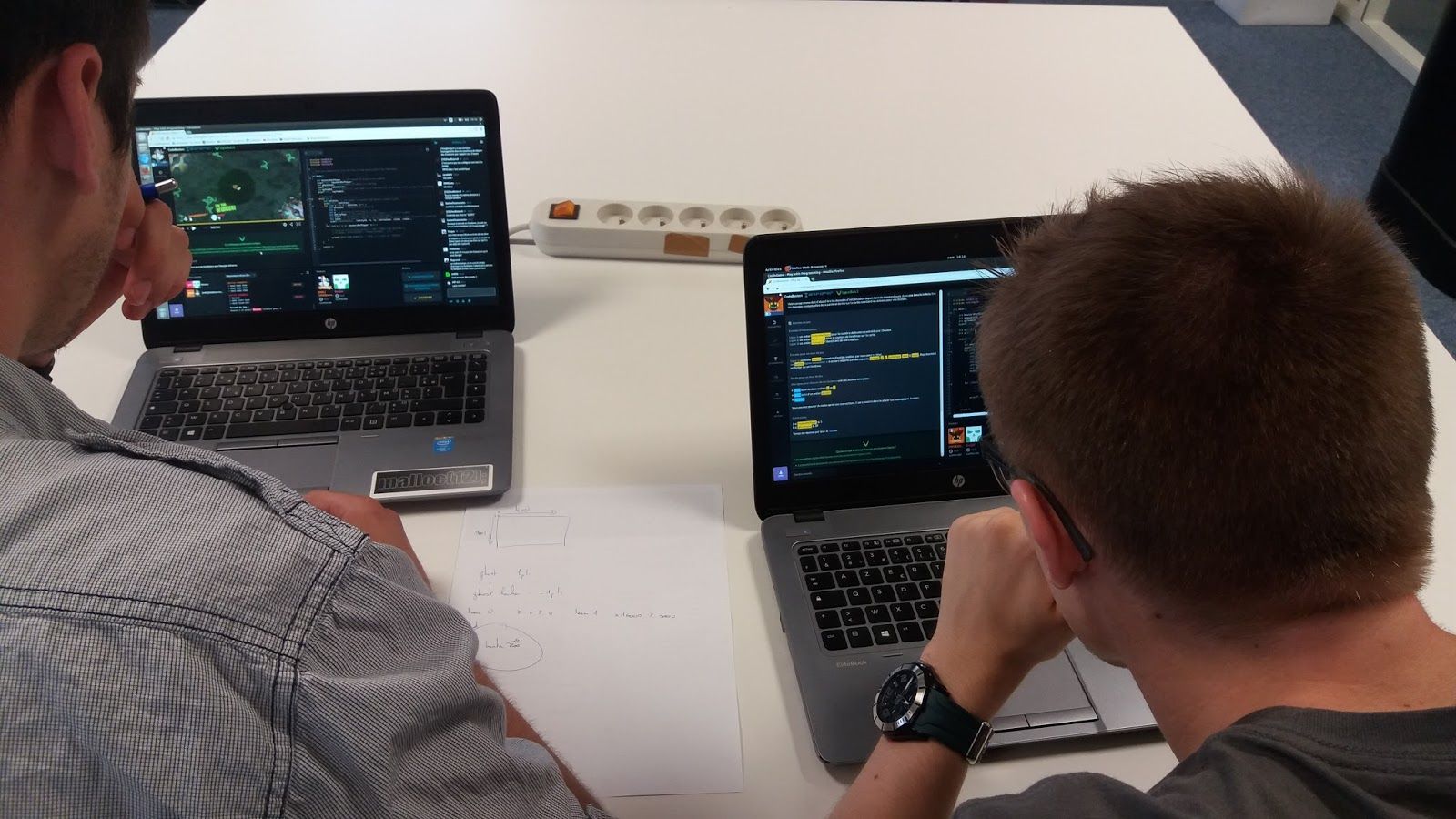 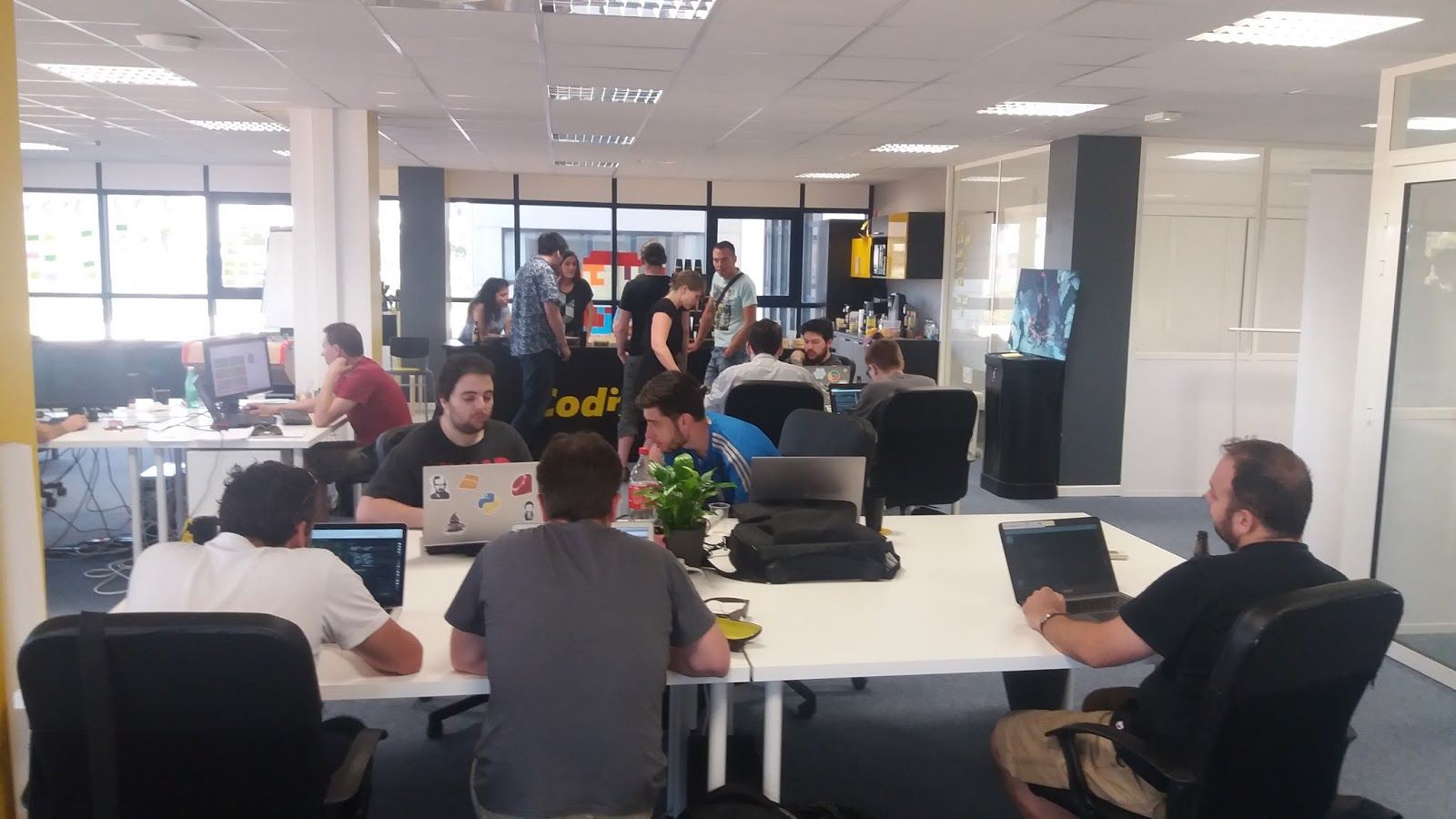 As you might have noticed, we’ve been very careful about how much information about the game we reveal. For Smash the Code, we released a video of a replay which revealed important parts of the game. The problem is that only a few CodinGamers managed to watch the video before the beginning of the contest. Even if just a few of them started coding in advance, it was not right for the others who couldn’t see the video.

On Saturday morning, as many CodinGamers couldn’t wait for the start of Codebusters, [CG]Maxime took an opportunity in the chat, and without checking with Maxime, [CG]SaiksyApo followed on with the idea:

[CG]SaiksyApo my AI is bugging when my ghost is splitting in two :/ I don’t manage to hide in the building :/ . I can’t beat you 🙁

It’s not much, not enough to begin to code anything

how do we edit?

So for those who haven’t tried Codebusters, there is no ghost splitting or building in the game. It was just a fun moment to see that some CodinGamers on chat thought we had accidentally leaked information about the game…

Ghosts are scary, even for busters!
Emoji time
There is room for improvement
Why would you bother capturing ghosts when you can just steal them?

What do you enjoy about the contest?

I find the contest great because you have to make an AI for the whole team, not just for one player.

If you had a piece of advice for other players, what would it be?

After seeing a bunch of replays that were shared on the chat, with strategies beautifully executed and also completely failed AIs (come on, it happens to everyone), we realized there was a possibility for a lot of fun with a team of busters and ghosts. We thus decided to launch a contest to find the funniest replays.

I invite you to send me your replays at [email protected], I’ll then publish them on Twitter and Facebook with the hashtag #CBFunReplay so you can like the ones you prefer. We’ll offer CodinGame T-Shirts to the three CodinGamers who shared the replays with most likes (if you share two replays, we take the one with the most likes into account).

Since Smash the Code contest, we’ve decided to work on our ranking process. FredTreg explains what has changed for Codebusters it in this forum topic. 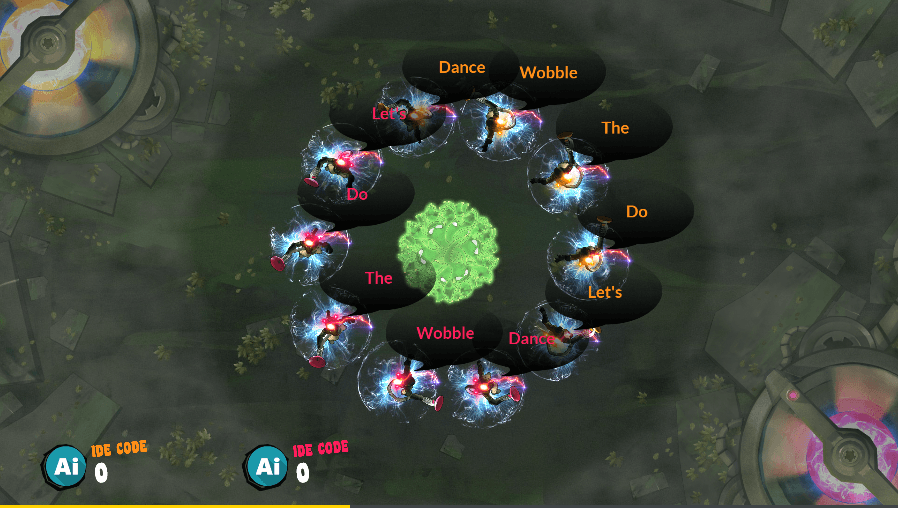 We’re building a mosaic of photos of all CodinGamers participating in Codebusters. Here’s a start: 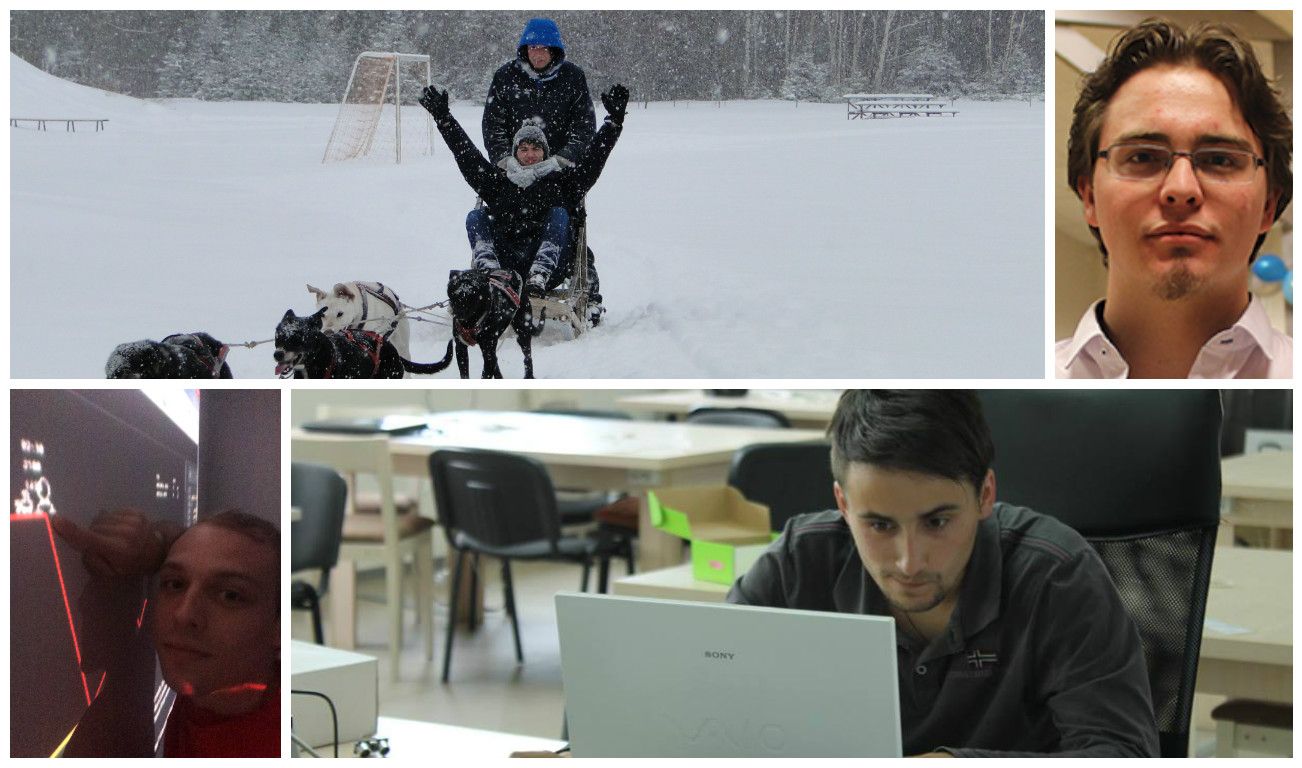 Send us your photos at [email protected], and we will add you to the mosaic!

Of course, these numbers are changing every minute, but here’s to give you an idea of the current size of leagues and used languages for Codebusters:

There are 574 CodinGamers in Gold league, in which Romka (C++) is the leader. In Silver league, Mwalimu (Pyton3) is the first of 311 CodinGamers. We can find 363 players in Bronze league with RXN (C++) on top. In Wood 1 league, there are 315 players with AndrewxD (C++) on top. Finally they are 157 to compete in Wood 1, Sunime (C++) being first of the league.
Legend league will be opened tomorrow, be prepared!

Don’t hesitate to send us more replays or share them directly with #CBFunReplay!

I’ve contacted some players and asked them questions about the contest. As it was quite long, I have put it in its own blog post: your reactions about Codebusters.

This time, the top 50 players will be awarded a CodinGame T-Shirt. For the previous contests, they were given to the top 10 players only.

As usual, you can also win a T-Shirt by ranking first in your programming language. However, we’ve noticed that some players took advantage of leagues to change their programming language and submit a poor AI once they achieved Legend. This time we’ll be checking this kind of behavior!

Finally, it’s possible to win a CodinGame T-Shirt by submitting us a fun replay. There are three T-Shirts to win in this fun replay contest. Fun replays have been shared for now on Twitter with hashtag #CBFunReplay. Like the ones you prefer! I’ll add them all on Facebook at the end of the contest.

Just a few hours before the end of the contest… we hope you had fun. Don’t worry the game will come back in the AI section soon.

There are three more fun replays:
One ghost to rule them all by paladinlll
Emoji style by PabloCRuiz
The ghost is mine by Mgayar

Good luck to Momopouccino for his CodingHub in Lyon today. Have fun!

Have all a nice end of contest!